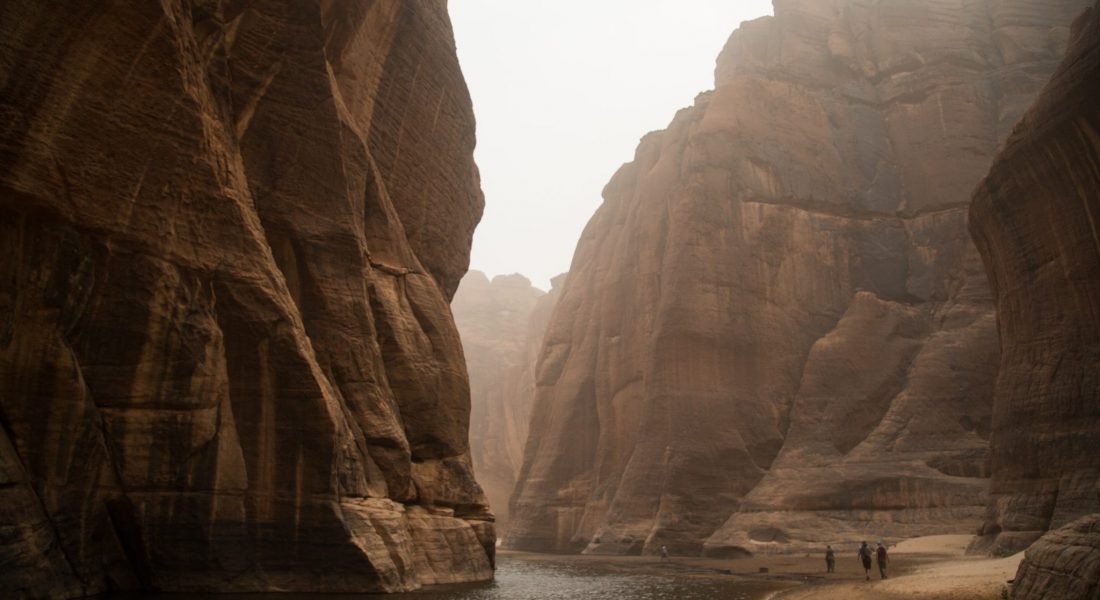 The Anderson Expeditions private guide extraordinaire, Fraser Gear, does his very best to put his recent experience of Chad’s Ennedi Massif and the Zakouma National Park into words. Here he explores the gigantic desert landscapes and Chad’s “park of plenty”…

“Blown away – by incredible sandstone formations, by enormous water bird concentrations, by abundant rock art, by spectacular low-level flights over hundreds of elephants, by Saharan silences, by roaring of lions….

Having just returned from Anderson Expeditions annual adventure to Chad I am feeling pretty challenged to put my experience into words.  Such an astounding and impressive region. This was my second visit to Chad and my first to the Ennedi Massif in the Sahara Desert. Richard and I joined the Ennedi section of the expedition and I was then joined by Mark McKenzie to co-guide the Zakouma expedition.

Arrival in Ndjamena, the capital city of Chad, is getting easier by the year with the airport officials becoming more accustomed to eager foreigners bristling with optics and cameras in the arrival’s hall. We stayed at the Hilton hotel which offers surprisingly good birding in the grounds and a cool hideaway from the dust and heat of Ndjamena.  Sunday afternoon is the traditional horse racing day so we headed out to the ‘hippodrome” to catch some of the action.  This fun and original take on horse racing offered a great informal cultural experience and a lovely point of departure, before heading to Ennedi the following day.

Ennedi is vast, awesome and spectacular. Towering sandstone arches, narrow canyons and Tolkienesque landscapes make this one of the most scenically incredible areas I have ever seen. Add to this an abundance of beautiful and fascinating rock art and one is left feeling as though one is wandering around in the most enormous natural art gallery. The region is home to some of the planet’s largest sandstone formations, arches and pinnacles with countless overhangs and caves decorated with mystical figures from a distant past.

We were looked after by a superb team in seasonal Camp Warda – an otherworldly retreat surrounded by chunky sandstone cliffs before heading out with a smaller mobile fly camping team into seldom visited regions of Ennedi and the Sahara.  Piere Paolo, our veteran Sahara guide and rock art expert led us on walks and drives seeking out top art sites and the region’s most spectacular sandstone formations. Wildlife was not abundant, but we did connect with some special desert species.  Pairs of Barbary Falcon flew sorties over the rugged cliff landscape, a Fennec Fox darted into her subterranean burrow and a surprise encounter with a seasonal pan added loads of waterfowl and migrant shorebirds to our bird list.  In the open desert we had great view of one of Africa’s most striking larks – the Greater Hoopoe Lark.

An incredible experience in the desert was watching Isa, our legendary Tubu guide navigating across close to 900km of roadless desert without ever consulting a map, gps or compass!  He would navigate directly to narrow passes, hidden caves and isolated oasis with unbelievable accuracy.  One does not want to explore this vast and unforgiving land without the local Tubu peoples incredible desert knowledge on your side.

The Zakouma leg of the journey started with a bang, minutes after landing at the parks headquarters, we were treated to an incredible sighting of ninelions tearing apart a freshly killed buffalo bull.  By the time we rolled into Camp Nomade we had already seen a fine diversity of birds and mammals but, as usual, the arrival at the camp settled on the spectacular Reguik pan was a highlight for all.  The pan was heaving with life. Hundreds of Black-crowned Crane, huge flocks of Great white Pelican, rafts of waterfowl and flocks of migratory waders attended the water’s edge whilst Beaudouin’s Snake-Eagle, Ruppell’s Griffon Vultureand Western Marsh-Harriercircled above.  A huge herd of Tiang mingled with Lelwel Hartebeest and numerous Bohor Reedbuck and Buffalo bulls on the grassy pan fringes.

Our week in Zakouma was incredible. We saw different prides of lion almost every day. Mammal diversity on day and night explorations was exceptional. We flew over the park on patrol flights and found the big herds of Elephant for which Zakouma is renowned.  Enormous herds of buffalo visited pans and drinking points along the Salamat river.  Small carnivores also featured well with regular bands of Banded Mongoose, White-tailed Mongoose, the awesome Ichneumon (Egyptian Mongoose), Side-striped Jackal, Serval, loads of genet, Honey Badger and Pale Fox all being seen.

Birding was non-stop and quite sensational with an incredible abundance and diversity on offer daily. We took our time photographing the local color bombs – Little Green Bee-eater, Abyssinian Rollerand Red-throated bee-eater. Black-crowned Cranecovered the pans in their hundreds and Great-white Pelicanpatrolled the park in gigantic squadrons to fish in the shrinking pools of water.  We had great views of two sought after birds – Egyptian Plover and Black-breasted Barbet.  Raptors were awesome and we managed to confirm a sighting of Greater Spotted Eagle– mostly unknown in Chad and I think only the second confirmed sighting for the country.

With highlights being too many to describe there was certainly an experience that stood out for all of us… Red-billed Quelea. Millions upon millions of birds would congregate to drink before roosting every evening.  We found a sweet spot on the Dikere stream where we stood in awe on many evenings as never-ending streams of quelea flowed like an Aurora Borealis above our heads.”

Good views of bulls from vehicles and on foot in the Salamat River. Large herds of 200 and 250 individuals seen from the air on patrol flight.

Common and entertaining throughout the park.

This slender and fleet-footed monkey is the only member of its genus.

Recorded by Mark at the Salamat Fly-camp site

Seen on a few occasions

A highlight for those that encountered this beautiful fox on a night drive and a new mammal for everyone on the vehicle except Mohammed!

Mark and his group saw a pair on night drive

Zakouma lived up to its reputation for excellent Serval viewing.

Genets are very common in Zakouma with multiple individuals encountered on every night drive. We saw both this and the following species.

In our experience the more commonly encountered of the two species

A few individuals were seen on night drives and their presence given away by almost nightly vocalizations.

The powerhouse of mongoose. Regularly encountered in pairs.

Both white-tailed and black-tailed types seen on nightdrives.

Not common but seen at Tororo and around Park HQ

Excellent sightings of these magnificent animals. Numbers are high so sightings are regular.

Big multi-coloured herds coming down to drink in the evenings at pans and on the Salamat. Amazing sub species with an incredible mix of colour ranging from dark almost black to bright reddish brown. On average an intermediate form between classic savannah and classic forest buffalo.

Uncommon but seen on one drive.

Common along the Salamat

Encountered in the area along the Salamat River.

This delicate gazelle was seen in small groups up to 5 individuals in the areas to the north and west of Camp Nomade.

Look no further than Rigueik pan for abundant viewing.

Large herds on Rigueick and Tororo.

Good numbers on all grassland and pan habitats – lots of young calves.

Excellent Roan viewing, including a lot of “rabbit-eared” calves.