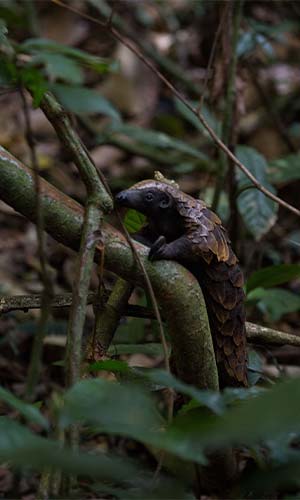 The Congo basin is one of the most critical wilderness areas left on Earth. It is covered by the world’s second largest tropical forest which is teeming with life and boasting biological diversity almost without comparison on the planet.

In the Republic of Congo, close to the geographical “Heart of Africa“, lies a near-mythical place of astounding beauty called Odzala-Kokoua National Park, one of Africa’s oldest National Parks.

Odzala is inhabited by more than 4,400 plant, 100 mammal and 440 avian species spread over a savannah-forest mosaic and forest gallery ecosystem interwoven with rivers and natural forest clearings called “bais”. Herds of forest elephant and buffalo are common in addition to healthy populations of bongo antelope, sitatunga, western lowland gorilla, chimpanzee, bushbuck, giant forest hog and numerous duiker and primate species. Odzala is the only place in the region where spotted hyaena can be found and regularly sighted.

Dzangha-Sangha National Park in the southwest of Central African Republic covers nearly 3,500km2 of moist tropical forest. The Sangha river forms the the parks western boundary and the international border with Cameroon in the south. Dzangha-Sangha is exceptionally ecologically rich and contains a variety of megafauna including a significant density of western lowland gorillas, chimpanzees, forest elephants, forest buffalo, bongo antelope and grey-cheeked mangabeys. It is perhaps best known for the Dzanga Bai, a mineral rich clearing in the rainforest where elephants gather in large numbers and shy forest creatures such as Bongo, Giant Forest Hog and Sitatunga can be easily viewed. 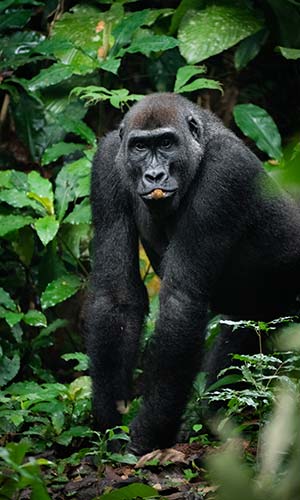 This expedition focuses on two of the prime locations to best experience the rainforests of the Congo basin – Odzala NP in Republic of Congo and Dzangha-Sangha NP in the CAR. It is an adventure in the truest sense of the word offering wonderful wildlife viewing, cultural immersion and a range of activities in which to explore this paradise.

Starting from Brazzaville we fly directly into Odzala and immediately game drive transfer to the epicenter of gorilla activity in the park. Two days of gorilla tracking follow before we move camp to the Lango area from where we explore the surrounding bais and Lekoli river. Splitting our time between 3 different camp locations we’ll also spend a night “fly-camping” at Dzébé bai, weather permitting.

A special charter flight takes us from Odzala to the northern border of the Republic of Congo where we’ll board our expedition boat for a journey north on the Sangha river. At Dzangha-Sangha NP we’ll base ourselves at Sangha lodge and explore the park and surrounds over the following 4 days. Our time here is filled with a day (and night on request) at Dzanga bai, gorilla tracking, forest walks, hunting forays with the Ba’aka pygmy’s and time spent with the pangolin research team, amongst other options.

We return down the Sangha river by boat and fly back to Brazzaville to connect with international departure flights.

Going up that river was like travelling back to the earliest beginnings of the world, when vegetation rioted on the earth and the big trees were kings. An empty stream, a great silence, an impenetrable forest. The long stretches of the waterway ran on, deserted, into the gloom of overshadowed distances. And this stillness of life did not in the least resemble a peace. It was the stillness of an implacable force brooding over an inscrutable intention.

African Parks entered into a 25-year-long agreement in 2010 with the Ministry of Forest Economy, Sustainable Development and Environment to protect this globally significant park. Odzala’s expansive landscape, remoteness and dense habitat are all factors that contribute towards the challenges of managing this landscape. Odzala has around 130,000 people living in the periphery of the park, who survive off the natural resources the area provides. Because of limited opportunities in the region, bushmeat poaching remains a major threat, where 11,000 snares and more than 46 tonnes of bushmeat were seized in 2018. This is a major concern for the park’s wildlife, especially Odzala’s western lowland gorillas of which 10% of the remaining global population are found in the park.

Odzala’s future sits precariously on the urgent need to unlock the park’s value to communities who live in and around the park and are the main stakeholders, and whose actions will determine if this park persists long into the future.

“The incredible forests of the Congo basin are the closest thing to the jungles of our childhood dreams. Skipping through unbelievable clouds of butterflies, splashing through streams and mud, glorious mud helps us to find our inner child like nowhere else. A cacophony of sound, shrieking chimps, “banging” hammer bats, rumbling elephants and hooting flufftails fills the air. Life is everywhere. So many creatures most have never even heard of… scaly-tails and flying mice, chevrotains and pottos, picathartes and bongos. Everything is growing, moist and magical. This is our mother continent at her absolute best!” 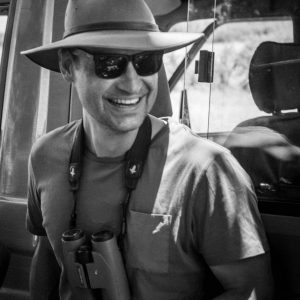 “On an afternoon kayak down the Lekoli river we came across three forest elephant bulls feeding on an island. Two of the bulls leisurely waded the river and melted into the riparian vegetation, as is the way of all denizens of the forest. The third bull crossed towards us then stopped at the rivers deepest part to shake his head, lift his foot and stare us down. His long, straight tusks dipping into the water disturbed the river’s current and we could hear his heavy breathing between our paddle strokes. He shook his head a final time then pushed through the river with ease before disappearing behind the curtains of the forest”