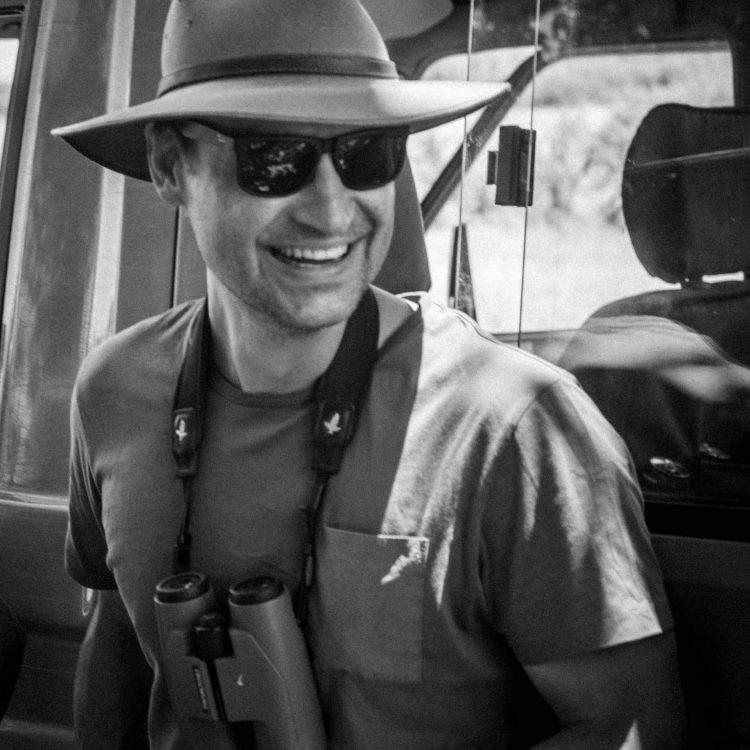 As an eight-year-old boy visiting the Kruger Park with his family Richard had the fortune of a near-death experience involving a lilac breasted roller, a pride of lions feasting on a giraffe, two very angry black rhino bulls and a game ranger recovering from a triple bypass. A life exploring the wonders of Africa was, thereafter, inevitable.

After university Richard was trained and subsequently guided in the Kruger National Park and in Northern Zululand in South Africa where his naturalist passions, including animal behaviour and birdwatching were developed. He spent time leading leopard research safaris and as a specialist private guide on various South African reserves. Pursuing his passion for exploring the bush on foot, Richard then trained and qualified as a walking trails guide and led multi-day walking safaris in the northern Pafuri region of the Kruger National Park.

After an exploration of South America’s natural areas in Brazil, Argentina, Bolivia, Peru and Chile, Richard was subsequently employed by a leading lodge operator in Peru to head up their guide training and guest experience division at their Amazon rainforest, Machu Picchu and Cusco lodges.

On returning to Africa Richard established himself as a pan-African safari guide, leading specialist trips throughout southern and east Africa and as far afield as the Horn of Africa and the central, west region of the continent. He has led kayaking expeditions in Madagascar, walking trails in the Kruger Park, cultural expeditions to the Omo Valley, canoe trails on the Zambezi river and flying safaris on the Skeleton Coast. He regularly guides trips to Namibia, South Africa, Botswana, Rwanda, Tanzania and Kenya and has recently added Ethiopia and Chad to his repertoire.

This template for tailormade expeditions fitted perfectly with Richard’s knowledge and experience of the South American continent. He has led expeditions in search of jaguars and tapirs in the Brazilian Pantanal, trekking adventures through the Andes in Peru, yacht-based explorations of the Galapagos Islands and journeys to the “end of the world” in Patagonia and Tierra del Fuego.

Guests on a safari led by Richard described their experience with the following:
“Richard… it was by far the best travel experience we have ever had. Much of this was due to your expertise, vast and intricate knowledge, wonderful humour and your personal capacity to manage people, and create an exhilaratingly fun space in which we all felt safe and confident. Thank you for being our friend, such good company and for guiding us safely through areas where we could not go ourselves”.